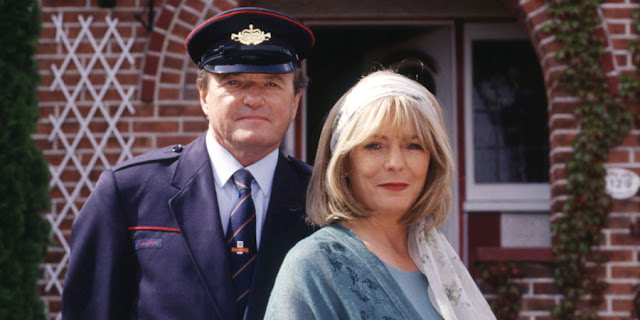 Nostalgia, the 1990s, and the Missing Postman

‘1990s’ and ‘nostalgia’ are two terms that don’t quite go together for me, but if I had to argue a case for there being such a phenomenon, I’d look to a pair of documentary series aired on BBC2 early in the decade, which are as good a portait of the times and the prevailing zeitgeist as you’ll find anywhere. Directed by Nicholas Barker, and with a distinctive aesthetic that was much imitated at the time, Signs of the Times* (1992) and From A to B (Tales of Modern Motoring) (1994) allowed ordinary individuals to talk about their lifestyle and motoring choices without the moderating influence of a presenter or voice-over. This made for a revealing set of programmes which probably tell us as much about the inhabitants of 1990s Britain as any demographic survey, and were also highly entertaining. But they’re not the subject of this blog.

I recently revisited a BBC comedy drama hailing from later in the same decade, which is what got me thinking about the subject of 1990s nostalgia. Because despite having been filmed over the summer of 1996, on location across a broad swathe of ‘Middle England’, I’d argue that this particular artefact of the decade is actually a form of nostalgia for another era altogether. Its heart is certainly in the right place, but that place is the 1950s, or perhaps more specifically, that mythic ‘golden age’ 1950s as depicted on screen in numerous old British movies, particularly those emanating from Ealing Studios.

The Missing Postman was offered up by BBC1 as a holiday treat across two nights over the weekend of Easter 1997. I watched it at the time and found it a warm, feelgood production with strong overtones of earlier British drama/whimsy hybrids such as The Beiderbecke Affair. The resemblance is more than coincidental, as former Beiderbecke front man James Bolam stars here as a similarly low-key, undemonstrative character. In The Missing Postman, he plays Clive Peacock, a Dorset postman who, unwilling to accept early retirement, cycles across Britain, delivering the letters from his final collection to the farthest corners of the nation. En route, he meets up with a collection of mildly eccentric characters, any one of whom might have been plucked from some Ealing classic like The Titfield Thunderbolt. With its theme of the little man fighting the system, Postman is, indeed very much like Titfield...

The film takes about twenty minutes to hit its marks, and is almost derailed early on by an ill-judged, exaggerated turn from Robert Daws as Clive’s manager at the sorting depot. Once he’s off screen, however, it settles down and, barring an encounter with Roger Lloyd Pack (who seems to have driven in from an episode of The Avengers), it’s a smoother ride from thereon in. Whimsy is never far from the surface, and the preoponderance of jaunty ‘English’ incidental music occasionally lends an air of Wallace and Gromit being done with real people. Without Bolam in the title role, it may well have been too cloying a mixture, but his performance is admirably restrained throughout, in contrast to some of the comic stereotypes we find elsewhere. Jim Carter is always watchable, but the comic cop he plays in a double act with his WPC ‘oppo’ Gwynneth Strong (best known for her role as Rodney’s girlfriend Cassandra in Only Fools and Horses) is a shade too contrived for the mix, and their bumbling sub-plot is often at odds with the film’s more human, thoughtful moments.

Comic stereotypes aside, The Missing Postman is a veritable who’s who of British acting talent, with room for everyone from the likes of Alison Steadman (as Clive’s DIY-manic wife) and Stephen Moore, to Roger Sloman and Milton Johns. Barbara Dickson gives a creditable performance as an obsessively epistolary widow with whom Clive shacks up for a night or two on the Isle of Arran. There’s even a moment when the script dallies with post-modernism: taken up by a smart PR operator (Larry Lamb), Clive has his appeal explained to him over breakfast in a posh London hotel: ‘You’re the full English, red telephone boxes, Morris Minors’. Which is, of course, a neat summary of The Missing Postman itself.

The Missing Postman may have been filmed in the 1990s, but it was nostalgic for a different era. Sure there’s modern technology (it puts Clive out of a job) and even mobile phones (their use reserved for the gaggle of media types who doggedly pursue Clive in his quest), but it’s as much a portrait of the 1990s as The Titfield Thunderbolt or Genevieve were portraits of the 1950s. The Britain they all aspire to never really existed. It’s the world in which Bertie Wooster, Steed and Mrs. Peel and the old codgers from Last of the Summer Wine beetle down leafy country lanes in a glorious, endless English summer. Not a bad place to be, all things considered: and after a year under lockdown, The Missing Postman is an ideal viewing tonic for anyone sick of confinement to quarters: we get to see a broad swathe of Britain from the Solent to the Scottish islands, and very pretty it all looks. Does any of it ring true? Not really, but one could argue it isn’t supposed to, and it’s fun while it lasts. This is a little slice of Brit fantasy, an alternate reality where a runaway postman becomes a national hero and everyone lives happily ever after.

If there’s one aspect of the film that seems firmly rooted in its time and place (aside from the awful, dull-as-ditchwater 90s cars) then it’s Alison Steadman’s insane DIY makeover which forms a subplot to the main chase story: while her husband is ‘on the run’, she transforms their modest suburban home into a gothic nightmare, with wall decorations made from tagliatelli, fake cobwebs and mock baronial swags in the dining room: all of which brings us back to where we started, because her off-kilter stylistic decisions echo much of what was seen in Nicholas Barker’s Signs of the Times, where an unusual number of interviewees had adopted eccentric neo-gothic interior design schemes, and bold colours were the order of the day.

The Missing Postman evidently found favour with viewers and critics, going on to win the award for Best BBC Comedy Drama at the 1997 Comedy Awards (one might, however, wonder exactly how many comedy dramas the Corporation produced that year). It’s not the kind of film one can imagine the BBC commissioning today, although its DNA can still be found in the likes of BBC4’s Detectorists (there’s even a metal detecting scene which strongly prefigures the later series).

Television offers up a lot of what might be called comfort food for viewers, but The Missing Postman served up something a shade more substantial. A full English, indeed.

[* At time of writing, Signs of the Times is available to download on the BBC iPlayer]

Mart C
I've always been a writer - I've just never got payed for it. Sunday in Old Money was conceived as a book, a form it may yet assume. In the meantime, this is your go-to source of reliable memories of pop cultural artefacts from the 1960s onwards, derived from diaries, recollections and original sources.